The KF-100 Dralthi is the original variant of the Dralthi. Still useful to the Kilrathi, it was eventually phased out by mid-2654.

The original Dralthi entered service between 2521 and 2529, a century before first contact between Kilrathi and Humans, and was the primary starfighter of all Kilrathi clans. [1] KF-100s served with distinction in dozens of inter-clan conflicts as well as in wars against the Wu, Varni and Mantu. These Dralthi continued to serve against the Terran Confederation, playing a role in every major naval engagement for the first twenty years of the War.[2]

It was nearly in the forefront of virtually every naval engagement of the war. During the course of the War Confederation agents managed to capture some Dralthi and study them.[1]

The KF-100s participated in the assault against the Pegasus Station and were seen in the region of Ulysses Corridor as escorts of the Thrakhra-class ConCom and the complement of capital ships near Planet 415.[3]

The Dralthi is a lightly armed and armored fighter-ship, its utility relying on its remarkable speed and maneuverability, plus effective group tactics, against superior Confed fighters like the Rapier.[1] These tiny medium fighters lacked the distinctive gull or bat wings of their descendants, featuring pointed, knife-like projections instead.

The ship's limited offensive potential was balanced by its efficient targeting systems, equal to the best available in the Confed. The life support-systems are capable of supporting a Kilrathi for about 10 hours (considering that Kilrathi are better adapted to privation). The impulse engines are based on the same basic concepts of the ramscoop technology used by Terran interplanetary craft. They lack jump capability.[1]

In adition, Dralthi can generate a light tractor beam that can tow 5 tonnes, used primarily for salvage. Dralthis do not have an ejection system as Kilrathi are expected to live or die with their fighters.[1] 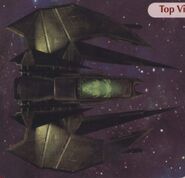 sillouette (Star*Soldier)
Add a photo to this gallery

The KF-100 Dralthi was a variant introduced in the Wing Commander movie and Handbook. It was mentioned and expanded upon in Star*Soldier.

According to the Arena developers:

Retrieved from "https://wingcommander.fandom.com/wiki/KF-100_Dralthi?oldid=12755"
Community content is available under CC-BY-SA unless otherwise noted.