Start a Wiki
Ejection is the process when a pilot abandons his ship to escape its destruction and hope for a rescue.

When a ship has sustained significant damage, the Eject Warning flashes to warn the pilot about the severity of the situation and to decide whether to eject or not.[1]

The Terran Confederation Navy awards the Golden Sun medal to a pilot for surviving the destruction of one's ship.[1]

Usually the pilot suit protects his body while in the vacuum of space, although some variants of Scimitars ejected the whole cockpits, engulfed by protective pods.[2] Such pods had some limited thrust power for stabilization[3] and tracking transmitters.[4] A pair of folded grappling arms helped a pod to dock with a larger ship.[5] While in the pods, the pilots where vulnerable as they could be tracked and shot by enemy pilots.[6][7]

Ships had receptors which allowed the securing of such pods and rescuing the pilots.[8]

Some Kilrathi ships also had their version of eject pods. They also had a parachute to fall on planets.[9]

A pod from a Scimitar 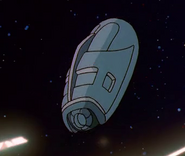 A pod from a Broadsword

A pod docks with Pleiku.
Add a photo to this gallery

Retrieved from "https://wingcommander.fandom.com/wiki/Eject?oldid=11875"
Community content is available under CC-BY-SA unless otherwise noted.