CF-117b Rapier is a version of the Rapier, the premier starfighter used by the Terran Confederation. It replaced the earlier F44-A Rapier (CF-117a Rapier) model with enhanced missile capacity and more efficient rotary-barrel neutron gun (its most distinguishing visual feature).[1]

It is seen as a good combination of acceleration, maneuverability and firepower. Its short-range neutron guns require close approach to the enemy, balanced by its handling superiority. There is also a CF-117b-L Rapier variant.[1]

It was more advanced than the older F44-A Rapier.

CF-117b was introduced in 2645 and in the later Terran-Kilrathi War it supplanted the CF-105 Scimitar in frontline operations.[1]

The CS Tiger Claw carried Rapiers which were used in engagements in the Ulysses Corridor.[2]

Dual neutron pulse generators can be set to alternate or synchronous fire, and the multibarrel allows longer continuous neutron fire. The wing-mounted lasers are to provide longer firing range. The wings function as weapon/missile mounts and can mount 10 missiles (dumbfire or guided) (the wings are not designed for atmospheric flight).[1]

It features an ejection survival pod, a standard Confed Tempest navigational/targeting AI, a jump-capable drive array, 7 hours life-support autonomy, and a retrieval tractor that can tow objects of up to 75 tonnes.[1]

There a few noteable differences between the newer CF-117b and the older F44-A Rapier. The newer model had increased missile capacity to ten guided or dumbfire missiles and packed a second generation nose-mounted rotary-barrel neutron gun that allowed for longer continuous neutron fire than the old F44’s first generation cannon. A switch on his stick allowed for alternate or synchronous fire, and standard laser cannons mounted to the 117’s short, upturned wings provided longer-range support. The standard Tempest targeting and navigational AI remained the same, as did the jump-capable drive array and twin thruster afterburner, as did the jump-capable drive array and twin thruster afterburnerpackage. Monitors and control panels seemed slightly smaller, but that could be an illusion. The seat felt a hell of a lot better though, with the welcome addition of lumbar support.[3] 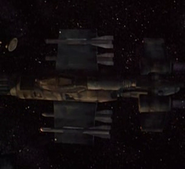 Ventral view
Add a photo to this gallery

This type of Rapier was introduced in the Wing Commander film the full-scale stage mock-up being constructed from the nose and cockpit sections of two English Electric Lightning jet fighters. This version of the Rapier is designated CF-117b and its primary weapon is a gigantic Gatling neutron gun on its nose, although the lasers were never fired during the movie.

In the novels its strongly suggested that Blair flew F44-A's in the film, and didn't start using the CF-117b until Pilgrim Stars.

Retrieved from "https://wingcommander.fandom.com/wiki/CF-117b_Rapier?oldid=12757"
Community content is available under CC-BY-SA unless otherwise noted.