The Bengal-class Strike Carrier is the Terran Confederation's primary strike carrier in the ConFed Fleet.

The Bengal was commissioned in 2619 and had been the Confederation's primary utility carrier and the mainstay of fighter operations. It is possible that it saw action during the Pilgrim War as well as it did in the Terran-Kilrathi War with the CS Tiger Claw as its most prominent example.[1][2]

The Confederation develops a replacement carrier with a scheduled rollout as late as 2657.[1]

As a carrier, the Bengal has a full hangar and repair facilities. It can carry up to 104 fighters or bombers, and is at least theoretically capable of launching all its fighters in about 12 minutes (depending on the crew's and pilot's experience and abilities). There is also space for corvettes or light transports (smaller than 35 meters). Most or some of the Bengal-class Carriers have a Stealth Mode that prevents enemy ships from detecting them after they make a Jump.[1]

It has room for a crew of 550, plus a marine complement. For tactical operations, modern ships carry enhanced map room imaging facilities.[1]

It defends itself with laser turrets against fighters, and torpedo ships against other ships or planetary targets.[1] 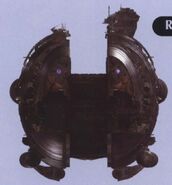 Deck plan (top)
Add a photo to this gallery

The Bengal-Class Strike Carrier of the movie is shorter than the Bengal-Class strike carriers of WC1 (which were about 690 meters). With the exception of Tiger Claw/Tiger's Claw which was 700m (Tiger's Claw is 700 meters in all sources).

The movie lists this as a "Bengal-class Carrier" in the film in regards to the "Tiger Claw".

Retrieved from "https://wingcommander.fandom.com/wiki/Bengal-class_strike_carrier_(2619)?oldid=14443"
Community content is available under CC-BY-SA unless otherwise noted.